Australia are in the danger of losing the Third Test at Mohali after losing three top order wickets in 21 overs before stumps on Day 4. The visitors were jolted by Bhuvneshwar Kumar who used both conventional and reverse swing to take all the three wickets to fall to give India hopes of a victory.

Australia are in the danger of losing the Third Test at Mohali after losing three top order wickets in 21 overs before stumps on Day 4. The visitors were jolted by Bhuvneshwar Kumar who used both conventional and reverse swing to take all the three wickets to fall to give India hopes of a victory. The visitors finished the penultimate day’s play at 75 for 3 with a deficit of 16 more runs to score. Everything now depends on whether Michael Clarke can come out and bat tomorrow to save the game despite suffering from back spasms.

The final session began with Peter Siddle wrapping up the Indian first innings by taking his 7th five-wicket haul. The breakthrough of the session was provided by Moises Henriques who surprised Bhuvneshwar Kumar (18 from 57 balls) with a short and rising delivery around the rib cage to force him to glove it to the keeper down the legside. Kumar’s partnership with Kohli was worth 61 runs for the 9th wicket.

Peter Siddle bowling at his best in this series wasted no time in knocking off No.10 Ishant Sharma and No.11 Pragyan Ojha. While Ishant got caught behind poking away from his body, Ojha was cleaned up through the gate by one that nipped back. Virat Kohli remained unbeaten at the other end with 67 (from 129 balls with 7 fours and a six). Siddle collected neat figures of 29.1-9-71-5. 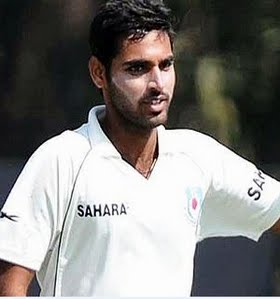 Australia with 21 overs to bat through lost the big wicket of David Warner in just the third ball of the innings! Warner didn’t move his feet and chased a widish away swinger from Bhuvneshwar Kumar with a rash square cut and got caught behind. Kumar who shifted ends for a second spell, struck again in the 8th over by trapping Ed Cowan lbw infront of leg and middle with a late inswinger that kept low.

Just when Kumar’s spell for the day was coming to an end, he surprised everyone with a magic delivery that uprooted the off stump of Steven Smith. It was a length ball that was angling in towards middle but deviated away with low bounce after landing on the surface to beat the frontfoot defence and smack the off stump. Apart from Kumar, Ashwin produced quite a lot of magic deliveries but was unlucky not to get amongst the wickets. For the Aussies, Phil Hughes who has been struggling to get going in this series rode his luck and scored a chancy 53* from 68 balls with 9 fours and a six. Never ever was Hughes comfortable at the crease but he was severe on anything that was wide outside off and collected boundaries in a hurry. At Stumps, Australia have night watchman Nathan Lyon (4* from 17 balls) with Hughes. Clarke could not come out to bat yet because of his lower back trouble.

Update at Tea on Day 4: India have lost the steam in their innings as the Australian bowlers triggered a mini collapse with the second new ball. By the end of the afternoon session, there was some recovery of sorts from the hosts thanks to Virat Kohli’s 6th Test fifty. At Tea, India have slowly progressed to 479 for 7 in 125 overs with a first innings lead of 71 runs. The post lunch session yielded only 95 runs in 30.5 overs at the cost of four wickets.

The Aussies got a wicket straightaway with the second new ball which was taken in the 102nd over. Murali Vijay was given out lbw offering no shot to a good length delivery from Mitchell Starc which swung back to hit his pad infront of middle. Vijay settled with a score of 153 that came in 317 balls with 19 fours and 3 sixes. Very soon, Starc got MS Dhoni (4) lbw as well with the Indian Skipper jumping down the track and missing a flick shot to an inswinging yorker that would have crashed onto middle.

Peter Siddle complemented Starc with the wickets of Ravindra Jadeja and R Ashwin with both the batsmen feeling for away going deliveries and nicking them behind to the keeper. For Jadeja, it was yet another failure with the bat in this format of the game. The left-hander looked shaky all the time as he was shuffling far too across and getting hit on the pad constantly. India had recovered after losing those four wickets to the second new ball thanks to a promising partnership between Kohli (50*) and Bhuvneshwar Kumar (17*) who got their runs once the pair of Starc and Siddle were rested.

Update at Lunch on Day 4: Australia did reasonably well to deny a double century on Test debut for Shikhar Dhawan and also by slowing down the Indian run rate in the morning session on Day 4. India collected 101 runs in 36.1 overs while losing three wickets. Murali Vijay has registered his third Test century, all of which have now come against the Aussies. At Lunch, India are 384 for 3 in 94.1 overs with a deficit of 24 runs to clear. Murali Vijay batted out yet another session to move onto 142*.

In just 20 minutes of play this morning, the Aussies saw the back of debutant Dhawan and Pujara. Shikhar Dhawan for all the commanding strokeplay yesterday got out in a soft fashion that too to Nathan Lyon. Dhawan jabbed hard in a frontfoot defence to a jumping off break and the ball flew off his splice straight into the hands of silly point. The 27-year-old could add only two runs to his overnight score of 185. Moments later, Cheteshwar Pujara (1) was given out lbw to a full length late inswinger from Peter Siddle which crashed onto the pad infront of middle but had also taken an inside edge which was missed by Umpire Aleem Dar.

Australia succeeded in strangling the Indians after the double blow although Murali Vijay and Sachin Tendulkar managed to steady the ship at the same time. By Lunch, Tendulkar departed getting caught at shortleg after gloving a bouncy leg break from Steven Smith in a forward prod. Tendulkar scored 37 from 81 balls with 5 fours while putting up 92 with Vijay for the 3rd wicket.

Build Up to Day 4: Time is running out of this 3rd Test at Mohali as the first day was completely washed out because of rain. Nevertheless there was no shortage of action in the next two days as India raced away to 283 for no loss in just 58 overs. Shikhar Dhawan is inching towards a double century on Test debut and Murali Vijay is looking good for another century against the Aussies. Overall, India’s gameplan will be to quickly move into the lead and then declare in the final session hoping to get a result of this rain-affected Test match.