Flashback: When West Indies handed the Aussies a 10-wicket thrashing

As Australia and West Indies prepare to face each other in the second Test of the two-match series to be played at Kingston, Jamaica, we look back at an unforgettable match played between the same two sides in March 1999.

As Australia and West Indies prepare to face each other in the second Test of the two-match series to be played at Kingston, Jamaica, we look back at an unforgettable match played between the same two sides in March 1999. Australia won the toss, and decided to bat first. The Aussies were led by Steve Waugh while West Indies were being captained by Brian Lara. The Aussie outfit of that match compromised Mark Waugh, Shane Warne, Glenn McGrath, Ian Healy and Jason Gillespie among others. West Indies on the other hand had Courtney Walsh, Curtly Ambrose and Jimmy Adams among their key players. 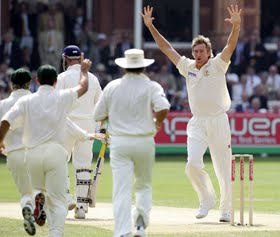 Batting first, Australia only managed 256 on the board, in spite of a century from Steve Waugh and a fifty from his brother Mark. Steve made exactly hundred from 165 balls before being the last man out while Mark contributed 67 from 117 balls. Their partnership of over hundred took Australia from a worrisome to a decent position, but once Mark was dismissed, the Aussies could not build on the alliance that had brought them back into the match. Australia were 158 for 4 when Mark was dismissed which meant the last six wickets added only 98. Walsh claimed 4 wickets for West Indies, and Pedro Collins three.

Having been dismissed cheaply, Australia needed to strike early, and they did so, reducing the hosts to 34 for 4. To make matters worse, Collins, who came in as a nightwatchman, had to retire hurt early. What followed was one of the most sensational fight backs in Test history. Brian Lara and Jimmy Adams joined forces to put the Aussie bowlers to the sword. Lara was in destructive form, looking completely at ease against champion bowlers like McGrath, Warne and Gillespie. Adams, as he was often known to do during those days, hung on admirably at one end. Together, they took the score from a precarious 56 for 4 to a formidable 378 for 5.

Lara, without doubt, was the standout performer. Under extreme pressure, he went on to compile one of his most famous double hundreds, eventually being dismissed for 213. His knock, which lasted 344 balls, compromised 29 fours and 3 sixes. Adams was dismissed soon after, falling six short of a century. He faced 252 balls, and hit merely 8 fours, but provided great support to Lara. McGrath dismissed both the set batsmen, and finished with a five-for, but it wasn't among his economical ones. Stuart MacGill chipped in with three, but West Indies posted a formidable 431.

Having gained a massive first-innings lead, West Indies had snatched the advantage their way. Their bowlers then rose to the occasion as Australia registered a rare batting collapse. Off spinner Nehemiah Perry made a place for himself in West Indies history picking up five wickets in his debut Test as Australia seemed drained out. Greg Blewett was the top scorer for the Aussies with a disappointing 30 as the Waugh brothers, Michael Slater and Justin Langer all failed. 177 was all the Aussies managed in the second essay in spite of a brief lower order resistance. The West Indies openers easily knocked off the three runs needed for victory as Windies won by an impressive 10-wicket margin.