It was disappointing to see India lose yesterday’s T20I by one run against the underrated Kiwis from a clear position of victory. Interestingly India’s jinx against the Kiwis continues in this format of the game as they have lost all the four T20Is played till date.

It was disappointing to see India lose yesterday’s T20I by one run against the underrated Kiwis from a clear position of victory. Interestingly India’s jinx against the Kiwis continues in this format of the game as they have lost all the four T20Is between the two teams played till date.

There is no doubt that the Chennai T20I was for India to win thanks to a wonderful knock from Virat Kohli. A delightful 70 from just 41 balls with 10 fours and a six from Kohli laid the foundation for an easy Indian win. Yuvraj Singh also didn’t waste much time trying to ease himself back into competitive cricket infront of thousands of spectators. India needed only 48 more runs to win from 40 balls when Kohli departed with plenty of batting left. 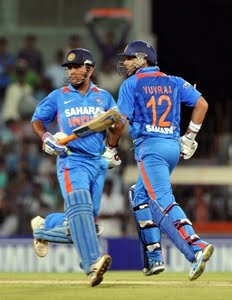 I was disappointed to see MS Dhoni walk ahead of the two other specialist batsmen – Rohit Sharma and Manoj Tiwary in that situation. First I thought it was just going to be too easy for MS Dhoni to see India through as he had been in such situations innumerable times and second that he was denying the opportunity to both Rohit and Tiwary from making some glory and also gain confidence.

We all know that MS Dhoni has this peculiar habit of holding back his big shots and start off his innings with the ones and twos. However, this was a T20I and the match was already in its final phase with very few balls left. Out of those 40 balls left in the innings, Dhoni consumed as many as 23 balls to come up with a pathetic 22 not out. In a T20, a batsman just cannot afford to eat so many balls just for scoring a mere 22. I think 10 balls are more than enough for the batsman to get used to the pitch and the situation in a T20I and after that he has to show urgency in the scoring rate.

Dhoni was just too complacent and as someone said he was ‘overconfident’ about his ability to finish the match anyway. It was bizarre that the Indian Captain blamed that the pitch had become slower and thus made it difficult for the lower order batsmen to score freely. This is totally wrong, India had plenty of wickets in hand and there was batting right till no.11. Even Irfan Pathan had the capability to win the match easily for India had he walked in ahead of Dhoni.

I wonder why Dhoni never took the risk of going for the big shots. We all know that his place in the team in this format is completely secured, then why he didn’t show the courage of going for the 4s and 6s? Does it matter if he had got out playing a risky shot early on in his innings? No, because there was plenty of batting left in the dug out in the likes of Rohit, Tiwary, Pathan etc. The problem for India was that even Yuvraj Singh lost his momentum in the partnership with MS Dhoni.

The Indian Skipper left it too late and put Yuvraj under tremendous pressure to manufacture the miraculous big shots under pressure. Yuvraj to his credit despite playing after such a long gap came up with a six out of nowhere to bring India back in the game but got bowled in the fourth ball of the final over. Dhoni’s plans were all buried after Yuvraj’s exit as a new batsman had to straightaway hit a boundary off the first ball he was to face as the equation then was 6 from 2 balls!

I happened to read somewhere that MS Dhoni’s strike rate in T20I is just about 110.00 which is not too good in this format especially for a man blessed with power hitting abilities. Dhoni will have to reassess his batting style quickly so that he doesn’t commit such blunders in the T20 World Championship. He has to realize that in a short game like T20, most often or not there are plenty of batting resources available.