The third day of the Birmingham Test began with Pakistan in firm control thanks to Azhar Ali’s fine century. Having kept the hosts down to under 300, Pakistan began the day with a deficit of only 40 with a good seven wickets in hand.

The third day of the Birmingham Test began with Pakistan in firm control thanks to Azhar Ali’s fine century. Having kept the hosts down to under 300, Pakistan began the day with a deficit of only 40 with a good seven wickets in hand. But, they ended up getting a lead of only 103, which was good in itself, but considering the fact that they were in such a commanding position, they should ideally have been in advantage of over 200. After England, held Pakistan to 400, the openers finally came to the party, unseparated having added 120 by the end of day’s play.

Alastair Cook finished the day unbeaten on 64, in the process becoming the England’s leading run-scorer across all formats, overtaking Kevin Pietersen. But, it was Alex Hales’ half-century that would have pleased England most. Hales had just not looked the part in the first two Tests, and the think-tank would have been extremely worried had be failed at Birmingham as well. Hales did not look comfortable out in the middle on Friday too. But, he hung on, and did not give up. He reached his half-century off 116 balls, which was also the last ball of the day.

England’s century stand for the first wicket was its first in 10 months. And, it was perhaps what followed before that inspired them. Their bowlers ensured Pakistan did not run away with the match, keeping things tight right through, and chipping away at the wickets constantly. They began the day at an impressive score of 257 for 3, and finished on exactly 400. Including Azhar’s scalp, the last eight wickets added 143, which definitely constitutes a collapse. The fact that the tail did not wag also aided England’s cause as they ran through the lower order.

Younis Khan, who has been struggling throughout the series, had an opportunity to build a big score. But, he again failed to convert a start. He glanced Chris Woakes down the leg side for 31. It was exactly the kind of start England needed. Asad Shafiq was at crease for 18 balls, but failed to get off the mark, as he was clean bowled by Stuart Broad with one that came back in. At the other end, skipper Misbah ul Haq held one end up for the team, as he has so often done over the years. The runs weren’t coming though, and England had stalled Pakistan’s progress. 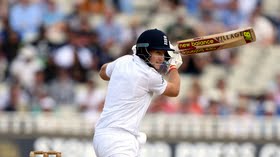 Yet again, it was the arrival of Sarfraz Ahmed that brightened up things. Ahmed stroked his way to a breezy innings to take the Pakistan lead past the 100 mark. In the company of Ahmed, skipper Misbah also grew in confidence and came up with some free-flowing boundaries. While the two were together, Pakistan held the upper hand. But, on 56, Misbah was bowled in unlucky fashion, when a defensive stroke off James Anderson hit his pad and foot before landing on to the stumps. That wicket changed things as Pakistan crumbled from 358 for 5 to 400 all-out. England’s openers ensured the advantage did not slip.