The First Test between hosts India and New Zealand gets underway tomorrow at the Rajiv Gandhi International Stadium in Uppal, Hyderabad. There is no contest between the two sides as India have been a former No.1 Test Team while New Zealand have been struggling abroad.

Preview of India Vs New Zealand, 1st Test at Hyderabad by BV Swagath

The First Test between hosts India and New Zealand gets underway tomorrow at the Rajiv Gandhi International Stadium in Uppal, Hyderabad. There is no contest between the two sides as India have been a former No.1 Test Team while New Zealand have been struggling abroad. The Kiwis couldn’t even manage to defeat the West Indies, who are also not such a strong team except for one or two world class players like Chris Gayle.

New Zealand are being led by Ross Taylor, who no doubt has plenty of talent, but he certainly doesn’t have the temperament at the Test level. The Kiwis are also without Daniel Vettori, their main strike bowler over the years because of a groin strain. Of course, it’s another matter that Vettori isn’t the same kind of wicket taking bowler in Tests, especially against India when compared to his exploits in the shorter forms of the game. Vettori will be missed though in terms of his tight bowling spells and his stubborn lower order batting. 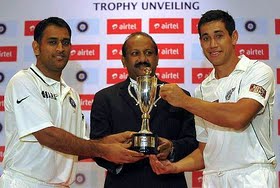 The Kiwi pace attack led by Chris Martin might find it difficult to get any kind of life from the Indian surfaces. Most of its pacers are also not that quick in the air to trouble the Indian batsmen. Doug Bracewell will be the man to watch out for India while left-arm medium pacer Neil Wagner could provide a bit of challenge for the hosts with his angles.

The Kiwis have announced that Brendon McCullum will be opening the batting for them. I can see McCullum fall prey to Zaheer Khan’s mixture of swing and seam bowling. But there will be the odd good knock from the likes of Brendon McCullum and Ross Taylor that we can expect to see in the 2-match series. New Zealand will have to bat pretty well if they have to take Test matches into the fifth day! So that will be a huge challenge for its batsmen who are yet to really stamp their class at the international level.

For India, it is an exciting squad with quite a lot of youngsters around finally in the longer format of the game! Most probably in the batting, India will have the likes of Cheteshwar Pujara, Virat Kohli and S Badrinath, who will add that oomph factor on the field. A couple of run outs here and there are like a huge bonus in Test Cricket along with some spectacular diving catches which can only come from energetic youngsters. India will get that thanks to the exit of old and tired warhorses – Rahul Dravid and VVS Laxman.

India will be mostly playing two pacers and two spinners for the First Test. R Ashwin and Pragyan Ojha would be the spin duo for the hosts. The Kiwis will have to watch out for Pragyan Ojha and his well disguised armers and drifters. Dhoni could get the Curator to get a pitch that could take turn so that the Indian bowlers will have a clear edge in taking 20 wickets to win the Test. As far as Dhoni’s pace options are concerned, Zaheer Khan is a certainty unless the team wants to rest him from a possible hamstring strain which he seemed to have sustained during practice. India will have room for just another pacer – either Ishant Sharma or Umesh Yadav. Going by experience, MS Dhoni could select Ishant Sharma but the better choice would be Umesh Yadav, who can bowl the steaming spells at 145-150 kmph to make cricket looking exciting.

The Indian batting is extremely strong especially against an inexperienced attack possessed by the Kiwis. If Sehwag survives for half an hour, he could go on to plunder their attack for a big century. In the middle order, there is the grand old man Sachin Tendulkar, who is always hungry like always to pile up yet another big score in his illustrious career.

The Test match is scheduled to start at 9:30 AM IST. Star Cricket will be broadcasting the match on Television. Cricwaves.com like always will bring you the ball by ball scores and commentary for all those who do not have the privilege to watch it on the Television.