With the cushion of a 2-0 lead, India would be going all out to clinch the series during the fourth Test at the Wankhede stadium in Mumbai. They will however have a somewhat unsettled line-up, owing to injuries to a couple of their key players.

With the cushion of a 2-0 lead, India would be going all out to clinch the series during the fourth Test at the Wankhede stadium in Mumbai. They will however have a somewhat unsettled line-up, owing to injuries to a couple of their key players. The out-of-form Ajinkya Rahane, who would have been keen to make an impression on his home ground, has been ruled out of the last two Tests after hurting his finger badly during a practice session. Mohammed Shami, on the other hand, is nursing a sore knee, and his participation for the Mumbai game is also doubtful. Manish Pandey and Shardul Thakur have been called in as cover.

With Wriddhiman Saha not having recovered fully from his injury, Parthiv Patel will retain his place behind the stumps. He made a few errors in the last game, so would be keen to improve on his glovework. Parthiv was highly impressive with the bat though, and would want to continue in the same vein. He would not be opening the batting though as Lokesh Rahul will be back at the top of the order having recovered from injury. Rahul failed in his last Test, and his constant injury woes have not helped the team's cause. With him back, Parthiv will have to slot in somewhere in the middle order.

The opportunity for England actually lies in India's wobbly top order batting. While there has been constant chopping and changing, the runs too haven't been coming. Murali Vijay began well with a hundred, but since batting has been a constant battle for him. His problems against the short ball have been particularly exposed, as he just hasn't been able to deal with the rising ball. The likes of James Anderson and co would be licking their lips as they run into bowl to Vijay. He will get a handful for sure. In fact, while Virat Kohli and Cheteshwar Pujara have been solid, India have wobbled owing to the struggles of Rahane. 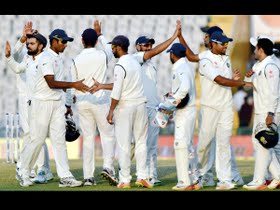 Owing to Rahane's unavailability, Karun Nair should get another opportunity to display his prowess after he was unlucky to be run out on debut. He might have a significant role to play in the event of Pujara and Kohli experiencing rare failures. The most impressive aspect of India's performance in the series has been the success of the spinners. That is quite obvious, but the fact that they have shone not only with the ball, but the bat as well, has enabled India to overcome tough situations. It has also given them the liberty to play five bowlers, knowing very well that Ravichandran Ashwin, Ravindra Jadeja and Jayant Yadav are all capable batsmen.

England themselves have been dealt with a big blow owing to the injury to Haseeb Hameed. The impressive youngster will be replaced by Keaton Jennings at the top of the order. He will have a big responsibility to shoulder. What has hurt England in this series has been the fact that skipper Alastair Cook and Joe Root have failed to get the big runs although they have been in form. A lot will also depend on Moeen Ali and Jonny Bairstow in the middle order. The news on Stuart Broad is that he is likely to be fit for Thursday's clash. That would be good for England surely. While India begin favourites, England would look back with hope, as they have got the better of India at Wankhede recently.