Spinners set up easy win for India at Kochi

West Indies’ insipid performance on their tour of India continued in the ODI Series as well. The visitors got a sound trashing by the defending World Champions who smashed the West Indian target of 212 with 88 balls to spare!

West Indies’ insipid performance on their tour of India continued in the ODI Series as well. The visitors got a sound trashing by the defending World Champions who smashed the West Indian target of 212 with 88 balls to spare! It was a pitch that had variable bounce and square turn. West Indies struggled big time with the bat but the pair of Rohit Sharma and Virat Kohli made batting look so easy to set up a 6-wicket win for India in this First ODI at Kochi.

There was a hope that the run chase for India will be interesting after Shikhar Dhawan was caught behind in the 4th over off a seaming delivery from Jason Holder. However, West Indies failed to sustain any sort of pressure on the in-form pair of Rohit and Kohli. Even Sunil Narine couldn’t do any magic to separate the pair and the fielding side was quite happy to surrender the match quickly. 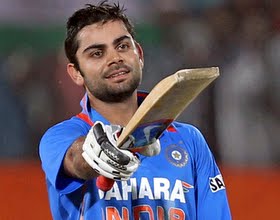 It was only in the 25th over that West Indies got their second breakthrough but by then the contest was sealed with India racing away to 150 on the board. Rohit Sharma’s attempt to pull Holder for a six went wrong and was caught at deep mid wicket. The batsman had to be content with a score of 72 from 81 balls with 8 fours and a six. Virat Kohli, like his partner, missed out on a century, after an ambitious lofted shot off Holder was miscued to mid off. Kohli walked back to the pavilion with an entertaining knock of 86 from 84 balls with 9 fours and 2 sixes. During the course of his knock, Kohli leveled Vivian Richards’ record of being the ‘Quickest player to score 5000 runs in ODIs’ taking 114 innings to get there.

India got to the target in the 36th over but before that had lost another wicket in the form of Suresh Raina. The southpaw who had earlier starred with the ball was out for a duck, slicing a big shot off Sunil Narine to point. Yuvraj Singh remained unbeaten on a watchful 16 from 29 balls along with Captain MS Dhoni who struck three fours in his 13*.

Virat Kohli got the Man of the Match award ahead of Rohit Sharma and the spinners.

West Indies Batting: India are well set towards an easy victory as West Indies were bowled out for a modest total of 211 in 48.5 overs. The pitch behaved badly with some balls staying very low and some kicking up, and there was plenty of turn for the spinners. West Indian batsmen failed to apply themselves and threw their wickets away.

It was the worst start for the tourists as Chris Gayle ran himself out in the second ball of the match, trying to steal a non-existing single from the bowler Bhuvneshwar Kumar’s right. Kumar fired a direct throw and had Gayle back to the pavilion, carried away in a stretcher after the Jamaican had an awkward landing on his knee in an attempt to complete the single.

Despite Gayle exit, Windies looked good with Johnson Charles caning the Indian bowlers in the company of Darren Bravo. India managed to get rid of the dangerous looking Charles in the 11th over, keeping his damage down to a 34-ball 42. Charles who hit 7 fours and a six was brilliantly caught and bowled by Ravindra Jadeja, off a leading edge to the bowler’s left. The visitors lost their third wicket in the 14th over when Marlon Samuels (24 from 35 balls) was clean bowled by Suresh Raina to a delivery that almost rolled along the ground!

West Indies recovered from a shaky position of 77 for 3 with Darren Bravo and Lendl Simmons doing well to defy the Indian bowling. The partnership was broken when Simmons (29 from 40 balls) played all around a flattish off break from Suresh Raina which stayed low to hit his pad for an lbw. The fourth wicket stand added 65 runs before it was broken in the 28th over. Raina reduced the visitors to 152 for 5 having Narsingh Deonarine clean bowled in an attempted slog sweep around off.

The icing on the cake for India came from Mohammed Shami when his low ball uprooted the off stump of a well set Darren Bravo (59 from 77 balls with 4 fours and 2 sixes). The other Bravo, the Skipper of the team, was back in the hutch soon, after stepping out for a big hit against the sharp turn from Jadeja to get stumped out. Dwayne Bravo threw it away after scoring 24 (from 28 balls) to leave his side in tatters at 187 for 7 in 38.3 overs. Jadeja got the 8th wicket down having Darren Sammy miscue a big hit to long on while R Ashwin helped himself to a couple of wickets in the end to wrap up things.

The Indian bowling was top class with the exception of left-arm pacer Jaydev Unadkat who conceded 39 runs in 6 toothless overs. Jadeja with 10-0-37-3 and Raina with 10-1-34-3 made most of the tailor-made pitch.

Toss and Teams: West Indies have won the toss and opted to bat first on a sultry afternoon in the First ODI at the Nehru Stadium in Kochi. The pitch has cracks and should slow down and take turn as the match progresses. India have made one change in their line-up with Jaydev Unadkat replacing Vinay Kumar.