ndia’s Test vice-captain Ajinkya Rahane may not have featured in a one-day game for his country for nearly a couple of years, but he is still confident of making a comeback in the format.

India’s Test vice-captain Ajinkya Rahane may not have featured in a one-day game for his country for nearly a couple of years, but he is still confident of making a comeback in the format. Rahane, who was ignored for the 2019 World Cup, last turned out for India in ODIs in February 2018 during India's tour to South Africa, scoring 140 runs at an average of 35.

“In the last two years, I don’t like to tell people that my record is good but yes the fact is, my record is good. Cricket is a funny game and anything can happen. I definitely hope to come back into the ODI team,” Rahane was quoted as telling PTI, according to an ICC report. 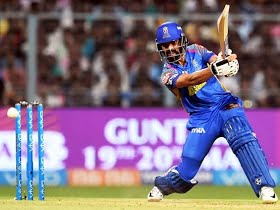 Rahane has, so far, played 90 ODIs for India, and has 2,962 runs to his name at an average of 35.26. The Mumbai batsman has three hundreds and 24 fifties to his name in the format. While the Indian team was playing the World Cup, Rahane fine-tuned his batting skills playing county cricket for Hampshire.

The Indian batsman admitted that the time away from the team helped him prepare better for the West Indies tour, where he registered his first Test hundred in two years. “At times, we get too caught up in our pursuit of success and then we suddenly realise that we are required to just stop, sit back and introspect. I did exactly that when I wasn’t selected for the 2019 World Cup,” Rahane revealed further in the interview with PTI.

“I am in a very good space right now and it started from the West Indies series. I was in England, playing county cricket where I learned a lot, not only as a cricketer but also as a human being. In two months, I played seven games. So it wasn’t always about on-field learnings but also about off-field learning,” Rahane further said.

Under pressure, Rahane ended up scoring 271 runs in the two-Test series in West Indies at an average of 90.33, and carried his form into the home Tests against South Africa and Bangladesh.

Divulging further details on how he got himself back in shape amid calls for his sacking, the batsman stated, “I sometimes walked alone in the parks, at times jogged. Sometimes I would simply sit with a cup of coffee thinking about past days, thinking about my younger days, what used to be my mindset when I played club cricket or age-group cricket before I made my international debut. I needed some answers and got them.”

In 63 Tests, Rahane has 4,112 runs to his name at an average of 43.7 with 11 hundreds and 22 fifties. In the IPL, Rahane will represent Delhi Capitals in 2020, having played for Rajasthan Royals for a major part of his career. Rahane, who was sacked as RR skipper mid-way in the 2019 season, scored 2,810 runs for them at an average of 34.26 and a strike of 122.65. He hit two centuries and 17 fifties for the Royals. He recently expressed disappointment at being sacked as captain.