IND vs SA 2015 1st T20 Live scores, Preview: In the handful of T20s that India and South Africa have featured in so far against each other, MS Dhoni's men have been dominant. Although it will be too early to term the hosts favourite on such a small sample size

In the handful of T20s that India and South Africa have featured in so far against each other, MS Dhoni's men have been dominant. Although it will be too early to term the hosts favorite on such a small sample size, India would definitely believe that they have a good chance of winning the series. They should, after all, most of their players spend two months playing IPL. South Africa have a strong side themselves, but they were given a good indication of what to expect when they were thrashed by the India A side rather mercilessly a couple of days back. T20 being an unpredictable format though, South Africa will be confident of doing well.

As the T20s kicks off in Dharamsala, India would look up to their star batsmen to deliver. Shikhar Dhawan has played himself into form just prior to the South Africa series. He got himself injured during the Sri Lanka series and needed some runs getting into the South Africa contests. Dhawan has three hundreds in his last three first-class games, and would like to continue to great form in the T20s as well. Rohit Sharma may have had a mixed time in Sri Lanka, but he's a lot more at home in the T20 format. Without a doubt, India is batting heavy, and will want to bat well with the likes of Virat Kohli, Ajinkya Rahane, Suresh Raina and MS Dhoni himself. 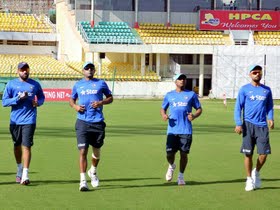 It is the bowling that might cause a concern for India. With no Ishant Sharma, they are short on experience, not that he was expected to make much of a difference. But, with only Mohit Sharma and Bhuvneshwar Kumar who have played some T20 matches, India may exhibit some weakness in the bowling department. They have Sreenath Aravind, who is over 30, and if he plays, he will actually be making his debut. India have a spin heavy T20 squad. While Ravichandran Ashwin is a certainty in the starting eleven, Amit Mishra and Axar Patel could also feature. It remains to be seen whether Harbhajan Singh gets a look in particularly in the wake of his poor recent form.

South Africa may have lost the practice game, but they have players who can trouble India. Like the hosts, they would also be heavily dependent on their batsmen, a precursor of which was seen in the practice game. AB de Villiers opened in that match and got the team off to a rollicking start. Will South Africa then stick to the strategy of sending their best batsman in first? Quinton de Kock fell cheaply in that match, but he had an excellent A tour of India after being dropped from the national side. He will want to have a good tour of India to get his place back in all formats. He has an excellent record against India, so that should give him confidence.

At the same time, South Africa would be pleased with the form their skipper Faf du Plessis and JP Duminy displayed against India A. Both are key players in the T20 outfit, and if they fire, South Africa become that much more dangerous. David Miller has had a rough run in international cricket of late, but he will try and bring all his IPL experience into play. Hashim Amla remains a key player even in T20s while Albie Morkel gets a chance to resurrect his career. South Africa's bowling will have some work to do in the absence of Dale Steyn. Can Kyle Abbott, Kagiso Rabada, Marchant De Lange and Chris Morris rise to the challenge?