South Africa have thrashed Bangladesh by 52 runs at Shere Bangla Stadium, Mirpur to go 1-0 up in the two match series. Skipper Faf du Plessis scored 78 not out to guide South Africa to a par score of 148 runs in mandatory 20 overs.

South Africa have thrashed Bangladesh by 52 runs at Shere Bangla Stadium, Mirpur to go 1-0 up in the two match series. Skipper Faf du Plessis scored 78 not out to guide South Africa to a par score of 148 runs in mandatory 20 overs.

Chasing the score of 149, Bangladesh lost their way early in the innings when they lost both their openers in the first two overs with the score of only 13 runs on the board. Shakib Al Hasan(26) and Mushfiqur Rahim(17) did try to stay on the crease but their partnership of 37 runs came off 36 balls which induced more pressure on the batsmen. Bangladesh again lost their way when they were reduced to 57-5 from 50-2. David Wiese picked settled Shakib in the 14th over of the inning and with Shakib back to hut Bangladesh lost their hopes of winning the games. Rest was just a formality for the visitors as they bowled out the home team for 96 runs in the 19th overs. So, it never looked like that the chase is on. Kagiso Rabada, David Wiese and Duminy picked up 2 wickets each whereas Abbott, Parnell and Phangiso got a wicket each. 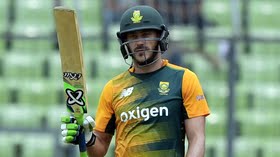 Earlier in the day, South Africa won the toss and elected to bat first. AB de Villiers took the responsibility of opening the inning with Quinton de Kock but he made the mess of it. de Villiers(2) played a shot straight to Mortaza standing at square cover on the last ball of first over. Bangladesh worked out quite well off the field to pick out the weaknesses of the visitors and they bowled according to their plans which worked for them as well. Spinners started the bowling from the both ends for Bangladesh which kept asking questions from South Africa. Quinton de Kock was looking good but he too missed time a cut shot straight to cover in the 4th over. Faf du Plessis struck eight boundaries in his 61-balls 79-runs inning. He added 46 runs with Duminy(18) for the third wicket first then 58 runs with Rilee Rossouw(31) for the fifth wicket. Rossouw played a little cameo of 31 runs late in the inning which included two boundaries and two sixes. Arafat Sunny bowled well for his 2-19 in 3 overs whereas Nasir Hossain and Shakib picked a wicket each.

The second and last match of this T20 tournament will be played on 7th of July. Bangladesh will have a opportunity there to win and level the series but South Africa will look the maintain their dominance going into the ODI’s.