PAK vs BAN 1st ODI Review: Shoaib Malik made the most memorable return to international cricket after a gap of two years, easing his way to a century as Pakistan went on to post a mammoth 375 for 3

Shoaib Malik made the most memorable return to international cricket after a gap of two years, easing his way to a century as Pakistan went on to post a mammoth 375 for 3, batting first against Zimbabwe at Lahore Gaddafi stadium, after winning the toss and deciding to take first strike. Zimbabwe responded with 334, with Elton Chigumbura coming up with a century of his own. But, Zimbabwe were never in the hunt during the chase. Their batsmen were content playing themselves in. They did go after the bowling towards the end, and successfully at that. But, Wahab Riaz yet again stood out with his aggression. His three-for was the difference between the two sides as Pakistan claimed victory by 41 runs. 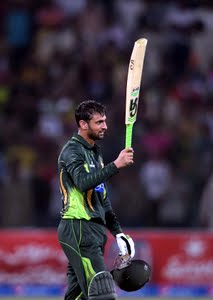 In a match dominated by batsmen, as the scorecard suggests, all of Pakistan's top four crossed the half century mark. While Malik went on to make 112 from 76, Mohammad Hafeez scored 86 from 83 after a slow start, skipper Azhar Ali contributed 79 from 76 while Sohaib Maqsood raced away to an unbeaten 89 from 66. Bowling was Zimbabwe's weak link, and once again was exposed against a strong Pakistan batting outfit. The fact was that the hosts did not attack right from the start and, in fact began rather slowly. They kept scoring at a decent pace throughout, and it was only in the last 10 overs that they really exploded.

While Zimbabwe lost by some margin in the end, their batting once again stood up to the Pakistani bowling and, in turn, they too exposed how weak the host's bowling attack was. The match went on similar lines to the two T20s, where Pakistan's batsmen outdid Zimbabwe at the end. The difference at Lahore was that Pakistan batted first, and set up the target. Still, if you take away Wahab Riaz from the Pakistan outfit, no one actually looked like picking up a wicket. Having been relieved a couple of times, Chigumbura went on to complete a hundred with ease. He eventually made 117 from 95 balls while Hamilton Masakadza chipped in with 73 at a run-a-ball.

In spite of Zimbabwe's best efforts, the story of the match was about Malik's splendid comeback. Over the last five years, he has been in and out of the side, and did not even have a fifty to his name, leave alone a ton. Malik correctly that anamoly on Tuesday, coming with his fastest one-day ton. Like the openers before him, he began on a slow note, understandable as this was his comeback. But, once he skipped down the track, and successfully hit Sikandar Raza for a six, his confidence grew. In all, Malik went on to hit 12 fours and 2 sixes. He must be thankful to Hafeez and Ali who made things easy with an opening stand of 170. Malik and Maqsood went on to slam 112 runs in the last 10 overs as Pakistan batted Zimbabwe out.

The game produced some incredibly poor bowling figures from both sides, a combination of a great pitch, and a poor bowling effort from either teams. While Malik had a memorable return to the Pakistani team, Mohammad Sami's comeback was more on disastrous lines. He conceded 63 runs in his 7 overs, and never troubled the batsmen. Anwar Ali went for 81 in his 10, and the rest, barring Riaz, were not much better. The story was the same with Zimbabwe, with almost everyone going at 7 and 8 runs an over. Looking at the series so far, it is clear that batting will decide the eventual winner.