Find here IPL 8 26th T20, DD Vs RCB, Delhi Live Scores: Delhi Daredevils and Royal Challengers Bangalore have been among the average sides in the tournament so far.

Delhi Daredevils and Royal Challengers Bangalore have been among the average sides in the tournament so far. But, they will go into the match against each other high on confidence since they have won their most recent matches impressively. Daredevils got the better of Mumbai Indians easily to bring to an end their nine-game losing streak at home. It was a much needed boost for Delhi as they again take on Bangalore at home. RCB, on the other hand, also got a massive boost as they got the better of the in-form side, Rajasthan Royals, and that too by a hugely comprehensive margin of nine wickets at Ahmedabad. 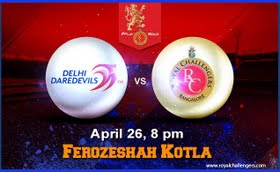 Delhi have recovered from a poor start to IPL 8 since a few of their players have stood up and delivered. Shreyas Iyer tops the list in the batting department, and is definitely one to watch out for. He is the leading run scorer for the team with 227 runs, and has been consistent at the top of the order. He will be keen to continue his good form as Delhi are heavily dependent on him. Skipper JP Duminy is another batsman who has shone for Delhi. He too has scored over 200 runs in the event. Delhi however would be worried with the form of their star player Yuvraj Singh, who just hasn't shone. The poor form of Mayank Agarwal would also be a concern.

Looking at Delhi's bowling, it has improved by leaps and bounds. Imran Tahir has been the standout bowler with 13 wickets, constantly troubling the opposition batsmen. Amit Mishra has provided him very good support, although he may not have the wickets to show. Both have been chiefly responsible for Delhi's rise as a bowling outfit. It would of course help if Angelo Mathews can contribute better with the bat. The other pacers must also make an effort to chip in.

Bangalore haven't been as consistent as they would have liked. But, they would be pleased that their skipper Virat Kohli has got back among the runs after a weak start. He has scored half- centuries in his last two visits to the crease. Also though he may be the away captain in the match, he is actually a Delhi boy, and thus will have some 'home' advantage. The form of AB de Villiers will also please Bangalore. After all, he has been the team's most consistent batsman. What they would be hoping now is for Chris Gayle to get back among the runs.

Bangalore's bowling also has improved in recent games. Mitchell Starc struggled with injury early in the tournament, but he was the star performer with the ball in the last game, and would now be keen to continue his improving form. Yuzvendra Chahal is another leggie who has shown in the tournament. There have been games when he has singlehandedly kept his side in the hunt. Bangalore now need better support for Chahal and Starc if they want to continue their winning ways. Looking at the form of the two teams, a close contest could be on the cards.