Dinesh Karthik reveals his role in the Indian ODI team

There has been constant debate over Dinesh Karthik’s position in the one-day team considering his average record in the format. However

There has been constant debate over Dinesh Karthik’s position in the one-day team considering his average record in the format. However, on Tuesday, the veteran ensured India went past the line with a key cameo at a crucial moment in the game.

Speaking after the game, Karthik revealed that the team management is looking at him as playing the role of a finisher. He made an unbeaten 25 from 14 at Adelaide on Tuesday.

"I've practiced it, worked on it and it's a skill I think is very important (finishing games). It's a skill where you need to have a cool head. A lot of experience helps. This is probably one of the hardest skills in the game. To finish a match and be on the winning side is something that is great to be a part of," Karthik was quoted as saying in an NDTV report. 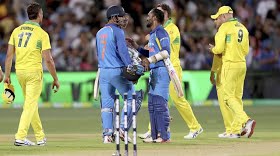 "Definitely the team management has told me this is the role for me right now. And they want me to do the best I can. They are backing me completely. They have told me that this is where I'm going to bat and this is what they expect out of me and I'm trying to achieve that," he added.

Karthik and MS Dhoni featured in a 57 runs for fifth wicket as the latter again hit a six in the last over to seal the deal.

"I think Dhoni's been pretty solid this series. It was the kind of innings he's played over and over again. So it was great to watch him bat and finish off an innings. We know he can absorb pressure and release it back to the opponents when the time is right,” Karthik, who was replaced by Dhoni in the team as wicket-keeper many years ago, stated.