India will need to perform well against James Anderson if they want to do well in the Tests against England, feels former Aussie pacer Glenn McGrath.

India will need to perform well against James Anderson if they want to do well in the Tests against England, feels former Aussie pacer Glenn McGrath. Anderson was highly successful against India during the last series in 2014, especially against current skipper Virat Kohli.

"Anderson is going to be a big player. It is how the Indian batsmen face his swing and bowling in English conditions. If they can get on top of Anderson, that is going to make a big difference for them. I think for them he is definitely going to be the key," McGrath was quoted as saying in a PTI report. 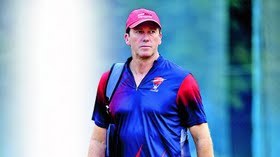 Reflecting on India’s performance in the series so far, McGrath added, "It is going to be interesting. I think India started really well in England, obviously it is in the ODIs and T20s. The batting line-up has always been their strength. Just heard about injuries to Bumrah and Bhuvi. So it will be interesting to see their bowling line-up, to see who comes in and takes the load.

"In recent times they have been bowling really well. Injuries do happen, it is going to make it a little tougher. But their strength is their batting," he went on to say.

The former fast bowlers also opined that spinners would be crucial for India. "Spinners have done well for India. Shane Warne loved bowling there. He always said if it seamed, it will turn. In English conditions it does seam a bit and Warne has had success there. India is going to need their bowlers, their spinners firing if they have to win the series,” he explained.