Australia crushed hosts India by 72 runs in the opening ODI at Pune. Chasing a tall target of 305, India came up with 232 all out with none of its batsmen staying till the end to put up a fight.

Australia crushed hosts India by 72 runs in the opening ODI at Pune. Chasing a tall target of 305, India came up with 232 all out with none of its batsmen staying till the end to put up a fight.

While the Indian seamers struggled to find any movement off the pitch, their counterparts managed to extract quite some life off the Pune wicket. In the 7th over, Shikhar Dhawan (7 from 15 balls) was caught behind off Faulkner by one that had angled in but left him late. Rohit Sharma provided the initial impetus for India but couldn’t convert his start into a bigger score. Rohit scored 42 from 47 balls before he was done in by the steep bounce from Watson in a cut shot. 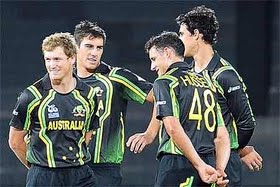 India were 66 for 2 in the 14th over when Suresh Raina joined the dependable Virat Kohli. The 3rd wicket pair added 71 runs before Raina slashed Faulkner to square thirdman. The hosts received a major blow when Yuvraj Singh (7) was caught behind poking a short and rising delivery from Mitchell Johnson. India at 147 for 4 in 29 overs was feeling the heat of the required run rate.

India’s hopes had crushed when Virat Kohli returned to the pavilion in the 35th over, lbw to Watson playing right across the line. Kohli scored 61 from 85 balls with 6 fours. Skipper MS Dhoni (19) couldn’t come up with any heroics and was bowled neck and crop by Clint McKay. All the Aussie bowlers did a fabulous job to bowl out India for 232. Faulkner took 3 for 47 while McKay and Watson chipped in with a couple of wickets.

Australia Captain George Bailey was the Man of the Match for his knock of 85 from 82 balls.

Australia Batting: Well paced half centuries from Aaron Finch and George Bailey helped Australia to a par total of 304 for 8 on a Pune pitch that looked absolutely flat. Although Australia have lots of runs to defend, the Indians should fancy chasing the target if the pitch remains to play the same way.

Batting first after winning the toss, Australia got off to a splendid start once the openers had a measure of the pace of the wicket. The opening pair of Finch and Hughes added 110 for the 1st wicket in 18.2 overs before the latter was dismissed by Jadeja. Hughes scored 47 from 53 balls and was caught at leg slip trying to work a turning ball from Jadeja. India came back in the game with Shane Watson (2) falling cheaply in a big shot off Yuvraj to leave the visitors at 113 for 2 in the 20th over.

Yuvraj Singh struck again 8 overs later when he had danger man Aaron Finch miscue a lofted shot to long off to end up with a 79-ball 72 (with 8 fours and 3 sixes). Yuvraj continued to have an impact on the game by running out Adam Voges (7) with a direct throw from point as Australia slipped to 172 for 4 in 32 overs. Glenn Maxwell once again showed glimpses of his super talent but settled with a cameo of 31 from 23 balls with 3 sixes. Maxwell was caught at covers smacking a full ball from Vinay Kumar in the 38th over.

Australia lost the fizz in the slog overs as Skipper George Bailey was losing partners at the other end. Bailey departed in the 47th over with an 82-ball 85 with 10 fours after his slog sweep off Ashwin flew straight to Raina. The visitors were reduced to 264 for 7 but had a fine finish thanks to a 22-ball 27 from James Faulkner. The best bowler for India was Ravindra Jadeja as he conceded only 35 off his 10 overs. R Ashwin, the main spinner once again bowled poorly although his figures of 10-0-55-2 do not suggest that.