Following the 4-1 thrashing in the one-day series that recently concluded, South Africa went into the T20 series as obvious underdogs. But, they have come back exceedingly well to clinch the T20 contest by winning the first two matches of the three-game series.

Following the 4-1 thrashing in the one-day series that recently concluded, South Africa went into the T20 series as obvious underdogs. But, they have come back exceedingly well to clinch the T20 contest by winning the first two matches of the three-game series. South Africa haven’t been dominant in either of the two wins. However, they have done well enough to outdo the hosts both with the bat and ball. They have been helped by the fact that Sri Lanka haven’t been at their best. Credit though must go to South Africa for returning with a bang in the T20 series following the disappointing performance in the ODIs.

It is South Africa’s bowling that has made the major difference in the series culminating in their triumph. In the first game, the Proteas were only defending a mediocre 115, but all their bowlers stood up to the challenge to thwart the hosts’ chase. Tsotsobe, Morkel, Parnell and Tahir all picked up wickets up crucial junctures. However, it was JP Duminy who stood out, demonstrating his value to his side in the format with a brilliant all-round performance. Duminy ensured that his handy knock did not go in vain, grabbing three big wickets to stall the Sri Lankan chase. 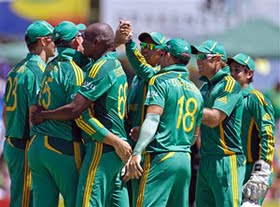 The victory in the first game at Colombo gave the South Africans the much-needed confidence, as a result of which they came up with a much more assured effort in the second game at Hambantota. Their batsmen put up a challenging score on board, and the big-hitting David Miller was chiefly responsible for the same. Duminy once again chipped in, but it was Miller’s smacking 21-ball 36 that gave the visitors the much-needed impetus towards the end, and also gave them the momentum at the halfway stage.

146 was a gettable score, but the South African bowlers must be commended for putting up a spirited show, and once again stalling the Sri Lankan chase. Like in the opening T20, it was South Africa’s combined bowling success that was most impressive. Each and every bowler was among the wickets as a result of which the pressure never eased on the Lankans. Tsotsobe and Morkel picked up two while Parnell, David Wiese and Imran Tahir grabbed one wicket each, all this while keeping the run rate down, and before Sri Lanka knew the series was out of their grasp.

In Sri Lanka’s case, the blame for the loss should solely rest on the failure of their batsmen. In the opening T20, they needed only 116 to chase, but in spite of Kumar Sangakkara’s unbeaten 59 they failed to cross the mark, an indication of how poor they were with the bat. Eight of their batsmen in fact fell for single figure scores. The target was tougher in the second game, but still achievable. However, a number of their batsmen got starts and gave it away as a result of which Lanka fell way short of the target in spite of having wickets left.