India skipper Virat Kohli praised his bowlers, who helped the team clinch the rain-curtailed game against New Zealand, and with it the T20 series.

India skipper Virat Kohli praised his bowlers, who helped the team clinch the rain-curtailed game against New Zealand, and with it the T20 series.

India won the eight overs per side game by 6 runs, defending a target of 69. With excessive rain around, the conditions were difficult for batting teams from both sides. 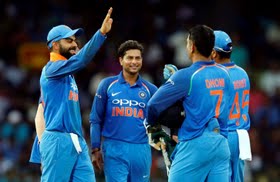 "In the second innings, they didn't give too many boundary balls. We wanted our best bowlers to get done early and leave so many runs in the end they would be left with a lot. They executed the plans well,” Kohli said on the victory.

On giving Hardik Pandya the last over, Kohli explained in the post-match report. "We had the confidence in Hardik, whose off-cutters are good. The wicket was damp tonight, so the ball was sticking to the wicket. I tried going up to him, but after three balls he said, 'I'll do it, you don't have to worry.' As a captain, when you get that kind of confidence from your bowlers, you aren't left with much to say.”

"I would like to compliment the ground staff as well for making the game happen so quickly," Kohli went on to say.