India look to fight back at the Premadasa

With the series tied 1-1, both teams would be keen to snatch away the advantage by clinching the third ODI to be played at the Premadasa Stadium at Colombo. Whoever wins Saturday’s clash will become the favourite to claim the series since rarely do teams come back from a 2-1 deficit in a five-match ODI series.

With the series tied 1-1, both teams would be keen to snatch away the advantage by clinching the third ODI to be played at the Premadasa Stadium at Colombo. Whoever wins Saturday’s clash will become the favourite to claim the series since rarely do teams come back from a 2-1 deficit in a five-match ODI series. Sri Lanka would obviously go in as the more confident team following the thrashing they handed out to India in the last encounter at Hambantota. India, on the other hand, would like to forget the nightmarish match and start afresh. 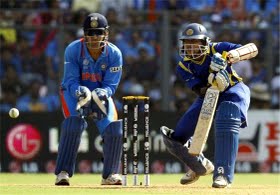 To make a strong comeback, India need to be mentally prepared to play on any kind of surface. They cannot go in with a mindset hoping that skipper M S Dhoni will win the toss and they would put up a big score batting first. Such a thought-process could only lead to disastrous results as the visitors witnessed at Hambantota. Keeping their loss in the last game in mind, it is clear that India will have to make significant improvements in all departments if they have to overcome the Lankan challenge.

As mentioned earlier, India’s batting which have to stand the test irrespective of conditions. The good part is that they have won a number of games at the Premadasa lately. Still, keeping mind India’s struggles in the last game, the pitch could be slightly on the lower side. The surface, in fact, had been relaid before the World Cup, and batsman haven’t found it as easy as before. Clearly, a tough challenge in store for India.

India’s woes against medium-pacers who move the ball even an inch have been demonstrated aptly over the years. What is surprising is that they cannot handle such conditions even when playing on the sub-continent. Thus, Thisara Perera has become a bigger threat for India than Lasith Malinga. The Indians will have to tackle Perera smartly. And whilst ensuring that they don’t fall prey to his tactics, they must also be careful of not taking the other bowlers in the team lightly.

With all the support coming in for Rohit Sharma, it looks like he will retain his place in the XI for the third ODI. However, he will be under immense pressure since Sharma hasn’t yet achieved the consistency expected of him, and his continuous failures have become exasperating. If he doesn’t perform in this game as well, it is only fair that Manoj Tiwary gets a chance in his place. After all, Tiwary scored a ton during the series against West Indies, and has done nothing wrong to be kept out of the XI.

As far as India’s bowling is concerned, Zaheer Khan has to inspire by leading from the front. The form of Umesh Yadav is a worry, but India don’t have a suitable replacement as of now so he will continue to get more opportunities.

India know what they must do to win. Implementation will be the key.