Rajasthan Royals pulled off a tremendous upset over defending IPL Champions Kolkata Knight Riders tonight at the Sawai Mansingh Stadium in Jaipur. Rahul Dravid’s move of fielding in an all-pace attack proved to be right as the hosts hunted for wickets and got them to push KKR on the backfoot.

Rajasthan Royals pulled off a tremendous upset over defending IPL Champions Kolkata Knight Riders tonight at the Sawai Mansingh Stadium in Jaipur. Rahul Dravid’s move of fielding in an all-pace attack proved to be right as the hosts hunted for wickets and got them to push KKR on the backfoot. A heroic knock from Eoin Morgan seemed to be spoiling their party towards the end but the man with the golden arm this season – Kevon Cooper got rid of him to seal the victory for the homeside.

Speedster Rahul Shukla first brought the Royals back in the contest taking two wickets in the 3rd over of the innings. That was followed up by medium pacer Siddharth Trivedi delivering a double blow in the 7th over removing Manoj Tiwary and Skipper Gautam Gambhir (caught brilliantly by the diving Keeper to a flashy drive). The KKR Captain was well set on a run-a-ball 22 when he lost his wicket through a rush of blood.

Yusuf Pathan did little to live up to his reputation as he came and departed in a flash by tamely giving catching practice to Wicket Keeper Dishant Yagnik off Kevon Cooper for a 2-ball duck. KKR were pushed into a losing position at 44 for 5 in the 8th over with this. The Rajasthan Royals chipped away gradually but at one end was one of the world’s best finishers in Eoin Morgan whose calculated shots threatened to take KKR to an unlikely victory. Morgan moved to 58 in just 38 balls with 3 fours and 3 sixes before he was bowled off his body trying out an innovative paddle sweep off Kevon Cooper who got the better of his with a nagging slower one. Morgan could have so easily won the game had he stayed the distance as the equation was well within his reach; the problem was that he had only two tail-enders left with him.

Kolkata folded to 125 all out in 19 overs with Kevon Cooper bowling the Royals to their second victory with his 3 for 15. Siddharth Trivedi with his 3 for 15 and the other pacers did their bit to script a win for the Rajasthan Royals. 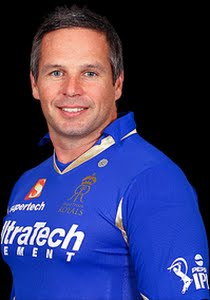 Hodge rescues Rajasthan Royals: A superb knock from T20 veteran Brad Hodge lifted Rajasthan Royals to a competitive total of 144 for 6 on a pitch that is conducive for pace bowling. Hodge scored 46* from 31 balls with 7 fours to lift the Rajasthan Royals from a poor position of 101 for 5 in the 16th over. Wicket Keeper Dishant Yagnik supported Hodge with a crucial cameo of 16 from 11 balls.

It was otherwise a modest show for the Royals with Ajinkya Rahane (36 from 34 balls with 3 fours and a six) and Rahul Dravid (17 from 20 balls) spending a lot of time but not doing much damage. Sunil Narine took a couple of wickets in the 16th over to put tremendous pressure on the hosts. Rajasthan Royals got off the hook and could score some extra runs thanks to Hodge.

Toss and Teams: Kolkata Knight Riders have won the toss and asked hosts Rajasthan Royals to bat first at the Sawai Mansingh Stadium in Jaipur. Rajasthan Royals have been boosted with the entry of Shane Watson who is likely to bowl as well. The four overseas players for the Royals are Watson, Cooper, Tait and Hodge. For KKR, the four overseas players are going to be Kallis, Morgan, Lee and Narine.