After winning the ODI series against Sri Lanka on Sunday, India captain Virat Kohli on Sunday

After winning the ODI series against Sri Lanka on Sunday, India captain Virat Kohli on Sunday said that India will look to change things around in the playing eleven for the remaining two matches

It may be noted that India have been unchanged in the first three games. "We have a squad of 15, we'll look to give some of the other guys a go. Having won the series already, we can afford to give those guys a go," Kohli said at the post-match presentation, according to a PTI report. 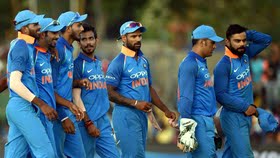 Although India crumbled again before recovering, Kohli maintained that chasing smaller targets was not an issue for his team. "Small targets are always tricky. If it happens to you two or three times, I don't think it's an issue. Here the wicket was a bit more challenging.

"The last game we had a collapse. The other batsmen really applied themselves. We have to be a bit patient with the younger players," Kohli added.

On Jasprit Bumrah's five-for, he said, "He's got 11 wickets in three games, he's bowled really well. Last game he missed out on a five-for, but he got it this time. He's doing a great job for us.”