Former Pakistan all-rounder Shahid Afridi has lashed out at the Pakistan Cricket Board (PCB) after another fixing scandal hit the country.

Former Pakistan all-rounder Shahid Afridi has lashed out at the Pakistan Cricket Board (PCB) after another fixing scandal hit the country. Afridi opined that the PCB needed to do a lot more to set the right example, so that the menace of match fixing in cricket could be curbed. 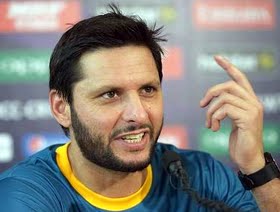 The ongoing Pakistan Super League is finding itself in the thick of a major controversy. While Sharjeel Khan and Khalid Latif, both of whom have represented Pakistan, have been suspended over corruption allegations, some others, including veteran Mohammad Irfan are being questioned. Afridi reiterates that PCB has gone easy on fixing in the past, which is why the menace has been raising its head time and again.

"What can I say? I have been saying in the past also that until the PCB sets or makes an example of such players it will be difficult to stop this menace. To me it is the same situation because you are allowing tainted players back into cricket," Afridi said while speaking to Geo Super channel on Monday.

Giving the example of how the cricket board dealt with Mohammad Amir, Salman Butt and Mohammad Asif after they were found guilty of spot-fixing in England in 2010, a furious Afridi questioned "What is the use if after five years the same players are coming back? I don't think this can be stopped until the right example is set."

The trio was banned for a minimum of five years. Amir returned to cricket in 2015, while Asif and Butt have also been allowed to take part in domestic competitions. Apart from Afridi, other prominent names in Pakistan cricket have also raised their voices against players allegedly involved in fixing. Former captain Rameez Raja, told a news channel that Sharjeel and Latif should be allowed to return to cricket, "over my dead body".

Mohsin Khan, a noted former Test opener was quoted as saying in media reports, "You can't show leniency in such cases. Once a player is found guilty of soiling the game and his country he should be told to leave cricket forever. But unfortunately in Pakistan cricket set-up, we still have some players who have been accused of fixing in the past."