On a high, having thrashed table-toppers Gujarat Lions in their previous encounter, a supremely confident Delhi Daredevils will face a struggling Rising Pune Supergiants at home, at the Feroz Shah Kolta on Thursday.

On a high, having thrashed table-toppers Gujarat Lions in their previous encounter, a supremely confident Delhi Daredevils will face a struggling Rising Pune Supergiants at home, at the Feroz Shah Kolta on Thursday. Pune have not only failed with the bat and ball, but have been hurt very badly due to injury issues as well. The big names who are out of the tournament due to injury include Kevin Pietersen, Faf fu Plessis and now Steven Smith, who had just hit peak form, a couple of games before getting injured. There really isn't much Pune can do except hope that the replacements can fire. 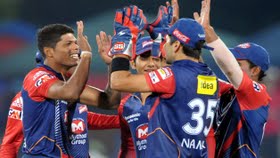 After a not-so impressive start, Delhi have fought back excellently, and now find themselves at number two in the points table. They have been in excellent all-round form in recent matches. Against Lions, their bowlers played a key part in the victory, restricting the opposition to a low total. The form of skipper Zaheer Khan would be highly encouraging for the team. He did not begin the series well, but has found his groove in recent times. Shahbaz Nadeem was also impressive in the match along with Amit Mishra, who continues to prove effective in the one-day format.

In the batting, there really wasn't much tough work for Delhi to do against Lions. Even so, the team will be extremely pleased with the manner in which Rishabh Pant came in and went all guns blazing. His whirlwind knock ensured Delhi were never under any sort of pressure in the chase. Quinton de Kock also carried on the great form that he has displayed in the tournament. He will be looking to carry on the same. But, the talented Sanju Samson has struggled, and the franchise will be extremely keen for him to get back among the runs.

As for Pune, they really have to find a way to win. So far, apart from the opening clash against Mumbai Indians, they haven't got their act together. Of all the batsmen. Ajinkya Rahane has done well, but he hasn't got much support from the rest. For a brief while, he had du Plessis for company, but now that he is injured, the woes for the team have only increased. And of course, it hasn't helped that MS Dhoni has been in wretched form throughout. Saurabh Tiwary got a fifty in the last match, but that too went in vain.

Bowling has been an equally big concern for Pune. They just haven't found any match-winning bowler so far. Albie Morkel and Thisara Perera have gone for plenty of runs, and have not even completed their quota of overs most times. Pacer Ashok Dinda shone in the match against Sunrisers Hyderabad, the one that Pune won against odds, but he hasn't been able to repeat the magic since. The biggest disappointment of all has been Ravichandran Ashwin, who just hasn't been at his best. In fact, Murugan Ashwin has done better than him, which says a lot about his poor show.