India stay alive with a crushing win over Pakistan

India eased to an 8-wicket win with 18 balls to spare in the crucial match against Pakistan at Colombo. With this India has maintained its 100% record of beating Pakistan in a World Cup match whether it is T20Is or ODIs!

India eased to an 8-wicket win with 18 balls to spare in the crucial match against Pakistan at Colombo. With this India has maintained its 100% record of beating Pakistan in a World Cup match whether it is T20Is or ODIs! India now has kept its hopes of making it to the Semis alive with one more match to go. Pakistan despite this defeat are very much in the competition with one win and one last match to come against Australia. 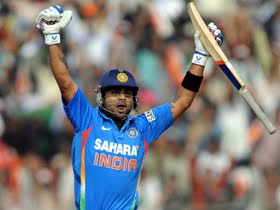 Needing just 129 runs to win, India got a solid partnership of 74 between Virender Sehwag (29 from 24 balls with 4 fours) and Virat Kohli which sealed the run chase. Virat Kohli finished the match in style with a classy knock of 78* (from 61 balls with 8 fours and 2 sixes). Yuvraj Singh spent quality time in the middle with his 19* (from 16 balls with 2 fours). The target was knocked down with three overs to spare.

It was a quiet start for India after Gautam Gambhir was caught and bowled by Raza Hasan for a duck in the very first over. The young left arm spinner bowled well for his 1 for 22 in 4 overs. However, India was more keen in being steady in the run chase. Even Virender Sehwag was prepared to play the waiting game and though he scored only 28 helped India to ease towards the target comfortably along with the fluent Virat Kohli. Saeed Ajmal for once was wicketless as Kohli in particular played him exceptionally well.

Pakistan Innings: India need just 129 runs to score from 20 Overs to defeat arch rivals Pakistan to stay alive in the contest. It was great stuff from the Indian bowlers and Pakistan once again showed that their batting is unreliable! The Pakistanis got bowled out for 128 in 19.4 overs with Ashwin, Yuvraj taking two wickets each and Balaji picking up three wickets.

The pitch should play well for India in the second half and with seven batsmen in the line up, it should be an easy win. There will be a contest of sort from the likes of Saeed Ajmal, Afridi etc but India has plenty of depth in the batting.

It was a terrible start for India with Zaheer Khan bowling a poor first over but Irfan Pathan made amends for that by trapping Imran Nazir lbw in the second over. Pakistan sent in Shahid Afridi at no.3 and rattled India for a while. However, Balaji had Afridi bounced out in the 5th over without much damage from the pinch hitter. Pakistan then went onto lose two wickets to Yuvraj Singh to find themselves at 49 for 4 in 8.2 overs!

Skipper Mohammad Hafeez playing a strange innings of 15 from 28 balls which ended when he chopped a cut off the innocuous Virat Kohli. Pakistan reduced to 59 for 5 in 9.5 overs sprung back to life through the partnership between Shoaib Malik and Umar Akmal. Just when the pair was looking good to set up Pak to atleast 150, Malik departed slogging Ashwin to mid wicket with his team at 106 for 6 in 15.2 overs.

Umar Akmal (21 from 18 balls) perished in the 18th over pulling Ashwin into the hands of deep mid wicket which dashed off hopes off Pakistan finishing with a decent total. R Ashwin was brilliant for India with his 2 for 16 in 4 overs.

Toss and Teams: Pakistan have won the toss and elected to bat first in the much awaited Super Eights Match against India at the R Premadasa Stadium in Colombo. Having defeated South Africa, Pakistan are in a good position in the Super Eights, while India are in a much win situation tonight to stay alive in the tournament.

India has made two changes with Harbhajan Singh and Piyush Chawla making way for Virender Sehwag and L Balaji.