RCB vs SRH: A must win game for Bangalore

IPL 8 SRH vs RCB, Preview Live Scores: Since a number of teams in the IPL this season are so close on points and matches, some games are now becoming do-or-die encounter for franchises. Mumbai Indians stayed alive in the competition by beating Kolkata Knight Riders in a thriller

Since a number of teams in the IPL this season are so close on points and matches, some games are now becoming do-or-die encounter for franchises. Mumbai Indians stayed alive in the competition by beating Kolkata Knight Riders in a thriller. Today, Royal Challengers Bangalore will take on Sunrisers Hyderabad at Uppal, and the loss against Kings XI Punjab in a rain-shortened game means they will have to win to stay in contention for the playoffs. Sunrisers Hyderabad on the other hand would also like to win since a triumph would give them a berth in the playoffs. They are in form, which gives them a slight edge as well.

Bangalore were unlucky that they had to play out a rain-shortened match against Kings XI Punjab. Such a scenario gave Punjab their best chance of pulling off an elusive victory, and they did the same, leaving Bangalore in a somewhat precarious situation. The big three of Bangalore -- Chris Gayle, Virat Kohli and AB de Villiers could not do much against Punjab as they tried to attack the bowling, but their performance would be crucial against Hyderabad. Another man Hyderabad need to watch out for is Mandeep Singh. He won them a similar rain-shortened game against Kolkata, and is a clean striker. 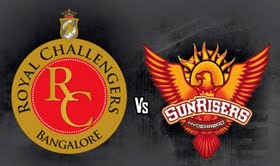 Bangalore's bowling cannot be judged on the basis of their performance against Punjab. Being merely a 10-overs a side contest, the batsmen held a massive advantage in that match. But, they would be tested against an in-form Hyderabad batting line-up. As always, Bangalore would look to Mitchell Starc to provide them with big wickets at crucial juncutres. Ever since Starc has returned to the side from injury, Bangalore have been a different bowling side. Not only has he been among the wickets, but he has also been extremely stingy in giving away runs. Thanks to Starc, the other pacers have had it easy, even as Yuzvendra Chahal continues to handle the spin department admirably.

The David Warner-led Hyderabad have been on a roll winning their last three matches, and would be keen to clinch a playoffs spot with yet another victory. They have so far posted seven wins against five losses. What has really changed for Sunrisers since the first half of the event is the fact that they are no longer dependent only on their skipper Warner. In the victory against Rajasthan Royals last week, Shikhar Dhawan, Moises Henriques and Eoin Morgan all scored crucial runs. The trio had been contributing in the earlier games as well. As for Henriques, he has proved his worth as an all-round cricketer to Hyderabad. He scored 74 against Delhi, and then picked three wickets against Punjab.

There is something about Hyderabad's bowling that keeps impressing game after game. Trent Boult has been such a success that they have had the luxury to leave out Dale Steyn although, given a choice, they would love to include both in the bowling line-up. The performance of Bhuvneshwar Kumar and Praveen Kumar is something that has aided Boult very well. The trio have tied down many opponents over the last few games, but taming Gayle, Kohli and de Villiers will need a special effort. Can they deliver again?