Hosts New Zealand put up a dominant performance to register an emphatic victory over Sri Lanka in the first Test at Dunedin.

Hosts New Zealand put up a dominant performance to register an emphatic victory over Sri Lanka in the first Test at Dunedin. Here's a look at five significant performances in the match by New Zealanders.

Martin Guptill: He was under immense pressure going into the first Test against Sri Lanka. The Australian bowlers were all over him in the previous series, and the opener failed to register even a fifty. Considering his overall poor Test record, New Zealand may have even considered dropping him. But, the think-tank stuck with him, and they were rewarded. Guptill eased his way to a hundred in the first innings, and went on to convert it to a 150. He registered an impressive 46 in the second innings as well, as New Zealand ended up setting a big target. An easy choice for man of the match.

Kane Williamson: The talented number three continued with his rich vein of form. In the first innings, he ensured that New Zealand put up an imposing total on the board, featuring in a big partnership with centurion Guptill. The alliance put the Kiwis in a strong position to push for a win. In the second innings as well, he batted fluently, featuring in another big stand, this time with the other opener Tom Latham, who also went on to register a hundred. The one aspect of his game, which Williamson should be perhaps disappointed with, is that he could not convert either of his fifties into a ton.

Neil Wagner: The Kiwi fast bowler finished with five wickets in the match. On paper, that does not look extraordinary. But, his impact was more psychological than statistical. He unruffled the inexperienced Sri Lankan batsmen with his pace, and it resulted in wickets for both him and the other bowlers. His effort on the last day of the Test particularly stood out. The performance was significant for Wagner since he hadn't quite lived up to the expectations in recent times after a hyped debut. 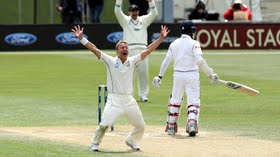 Tom Latham: Much like Guptill, Latham too did not enjoy a great time in the series against Australia although he did get a couple of starts. At Dunedin though, he was in full flow in his second innings. Latham batted with great composure as he, in the company of Williamson, shone to help New Zealand set a big target for Sri Lanka.

Tim Southee: He had a poor series against Australia, a combination of bad form, and lack of fitness. It wouldn't be right to say that the fast bowler was at his best at Dunedin. But, under conditions that suited his style of bowling, he definitely was a far more potent. Southee will be expected to do better in the next game considering his experience. Of course, support from Trent Boult will help.