When the 2016 World T20 kicked off, not many would have placed their bet on England and West Indies making the final.

When the 2016 World T20 kicked off, not many would have placed their bet on England and West Indies making the final. Hosts India were the outright favourites, with South Africa again been seen as a danger side. Very early in the tournament though New Zealand joined the party of favourites with impressive wins over India and Australia. But, all these sides have been knocked out one by one, South Africa, yet again, in the league round, while New Zealand and India managed to make it to the final four. However, England and West Indies have, in totality, proved to be better than the other sides, and have deservedly made it to Super Sunday. 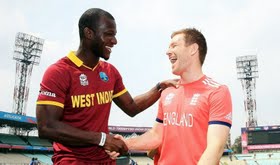 England and West Indies have taken two contrasting yet equally effective road to the finals. While West Indies have utilised the brute force of their batsmen to outdo opponents, best displayed in their powerpacked chase against India during the semi-finals, England have worked their way ahead with smart play, combined with big-hitting and impressive bowling. The last time these two teams met, England's bowlers were no match for Chris Gayle, as he singlehandedly took his team to victory. As such, West Indies should go into the match with a hint of upper hand. But, this is the big final and it will all come down to who holds the nerve better on the big day.

England would have seen the West Indies batsmen murder the Indian bowling on Thursday at the Wankhede, and while Eden Gardens is not expected to be a massive belter, the English bowlers would be wary of Windies' explosive batting threat. The semis was a fine example of the fact that there is more to West Indies than Gayle. Lendl Simmons proved the age old adage of being in the right place at the right time true once again, coming out of mini-wilderness to lead the team into the final. The likes of Johnson Charles and Andre Russell also reiterated what a threat they are in the T20 format.

Till a year or so ago, it may have sounded odd. But, the fact of the matter is that, on the power-hitting quotient, England go into the final as equals. Jason Roy may not be as explosive as Gayle. But, as he proved against New Zealand in the first semis, he has all the strokes in the book to play the blazing knock. Alex Hales hasn't fired as yet, so he will be keen to make an impression in the final. Joe Root played that spectacular knock in the record breaking chase against South Africa even as Jos Buttler has provided the team with the much-needed final flourishes. England's captain Eoin should be worried with his form though.

The final at Eden Gardens could well prove to be a battle of all-rounders, who can win games with both bat and ball. In fact, it cannot be a co-incidence that the two finalists are the ones with maximum players who are versatile. West Indies have Dwayne Bravo, Russell and Carlos Braithwaite. On the other hand, England's ranks comprise Ben Stokes, Moeen Ali and Chris Jordan. Spin is also one aspect where both teams are equally matched. Moeen and Adil Rashid will have the responsibility for England while Samuel Badree and Suliemann Benn will have to perform the task for West Indies. All said and done, the teams indeed seem well matched, in spite of their contrasting styles of play.