What comes with Rishabh Pant, we are ready to accept that: Rohit Sharma

Team India captain Rohit Sharma has stated that India are ready to accept what comes with Rishabh Pant because of his game-changing ability. There have been mixed reactions to Pant’s style of play and, at times, he has been criticized for not playing to the game situation. Rohit admitted that Pant has been told to show greater game awareness at times. However, he asserted that the think tank has asked Pant not to deviate too much from his natural game

The Indian wicketkeeper-batter was named the Player of the Series for his impressive performance in the two-match Test series against Sri Lanka at home. In the second innings of the 2nd Test in Bengaluru, he broke the record for the fastest fifty by an Indian.

Speaking about Pant, Rohit said after India’s victory in the series, "We know how he bats and as a team we just want to give him that freedom to bat in the way that he wants to bat. But also keeping in mind certain situations of the game, where the game is going, we have conveyed that to him but we want to stick with his gameplan as a team.” 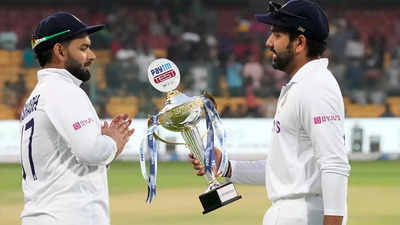 The 34-year-old added about Pant, "It just seems to get better and get better, his game-plans. There will be times when you will smash your head and say 'why did he play that shot' but again we need to be ready to accept that with him when he bats. He is somebody who can change the game literally in half an hour or 40 minutes of the game. I think what comes with Rishabh Pant, we are ready to accept that.”

Rohit also admitted that Pant’s keeping has improved significantly. Praising the youngster, he said, "His keeping was the best that I have seen. He kept well when England came last year and he seems to get better every time he keeps wickets for India, so that is something that I have been very impressed with.”

He added that the keeper is a big help with the DRS calls as well and he wants Pant to keep playing a big role in it. Rohit explained, "And also the DRS calls, (he) seems to be making the right calls. DRS we all know, it's like a lottery. There are certain aspects of the game that I have told him to look into and that's about it. DRS calls are not something you will always get it right, there will be times when you will be making wrong calls, but that's absolutely okay."

Leading in his first series as Test captain, Rohit led India to a 2-0 series win over the Lankans. India clinched the pink-ball Test inside three days as Sri Lanka folded up for 208 in a chase of 447