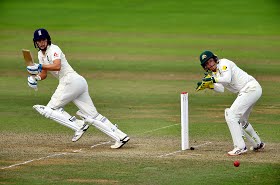 England women’s team vice-captain Nat Sciver has claimed that the current Indian team women's team seems to be more fearless than before. India will be meeting England in a one-off Test, starting in Bristol on June 16. The Test match will be followed by three ODIs and an equal number of T20Is.

• England should look at New Zealand and try to improve: Nasser Hussain

Former England captain Nasser Hussain has hailed New Zealand for their methodical approach after the Kiwis trumped the Englishmen by eight wickets in the Edgbaston Test on Sunday. The victory marked the Black Caps’ first Test series win in England since 1999. It was also England’s first Test series loss at home since 2014. According to Hussain, New Zealand were brilliant in both Test matches.

Young Maharashtra batsman Ruturaj Gaikwad has said that he will look to bring his adaptability to the fore during India’s upcoming tour of Sri Lanka. Gaikwad is among the new faces in the Indian team for the tour of Sri Lanka. A limited-overs specialist squad will face the Lankans in three ODIs and three T20Is from July 13 and July 25. Gaikwad has impressed for Chennai Super Kings (CSK) in recent IPL seasons.

• India going to be a really big test for us: England captain Heather Knight

Indian women’s team will take on England in a one-off Test, starting June 16 in Bristol. This will be the Indian women’s team’s first Test since 2014. However, despite having more experience in the longer format of the game, England captain Heather Knight is wary of the Indians since the women’s game has only just restarted and there are a lot of unknowns in the post-pandemic era. According to Knight, India are a very good side and will test them in the upcoming series.