South Africa crushed hosts New Zealand for a 9-wicket win inside three days in the Second Test Match at the Seddon Park in Hamilton. The 26-year-old Vernon Philander claimed his second 10-wicket haul to bowl the Proteas to set up towards a huge victory on the third day’s play.

The Black Caps resuming Day 3 at 65 for 4 in their second innings got wrapped up for just 168. Overnight batsman Kane Williamson top scored for the Kiwis with a well made 71 (from 193 balls with 10 fours). The rest of the batsmen failed to get anything significant for the hosts who were destroyed by the 6 for 44 from Vernon Philander. 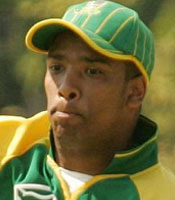 South Africa needing just 101 runs for a victory eased to the target in 19.5 overs losing just the one wicket. Skipper Graeme Smith helped himself to an unbeaten 55 (from 60 balls with 8 fours and a six) and Hashim Amla collected 46 not out (from 56 balls with 9 fours). Vernon Philander was named as the Man of the Match with South Africa leading the 3-Test Series 1-0.