Netherlands upset South Africa by 13 runs in match number 40 of the ICC Men’s T20 World Cup 2022 at the Adelaide on Sunday, November 6. The Super 12 game had massive repercussions on Group 2. The Proteas got knocked out of the competition, while India booked their place in the semi-final. Irrespective of what happens against Zimbabwe later in the day, they will finish in the top two. Also, the winner of the Pakistan-Bangladesh clash will make it to the semis from Group 2.

South Africa won the toss and opted to bowl first in the game. They needed to restrict the Dutch to a small total, so that there was less pressure on them in the chase. However, Kagiso Rabada (0/37 from 3 overs) and Lungi Ngidi (0/35 from 3 overs) had off days as Netherlands managed to post a competitive 158/4. Anrich Nortje stood out for the Proteas with figures of 1/10 from four overs, while Keshav Maharaj (2/27) also impressed.

The Dutch, though, came up with their own impressive performances with the willow. Stephan Myburgh contributed 37 off 30 and Tom Cooper 35 off 19. Max O'Dowd also made 29, but it came off 31 balls. It was Colin Ackermann, who played the game-changing knock, slamming an unbeaten 41* off 26 balls. His aggressive innings featured three fours and two sixes as Netherlands got the much-needed final acceleration. 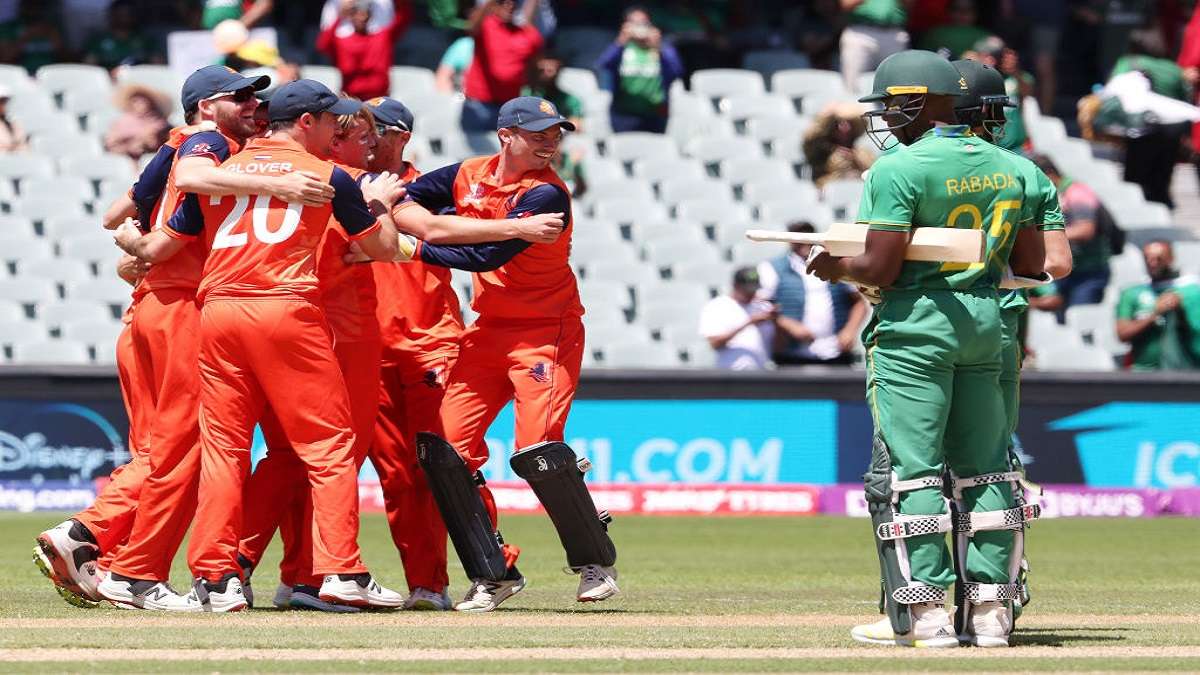 South Africa were just not in the chase. Batters came in played a couple of good strokes and got out. It began with Quinton de Kock (13) and carried on till the last South African wicket fell - Maharaj (13). Temba Bavuma was bowled for 20, Brandon Glover took out Rilee Rossouw (25) and David Miller (17). Aiden Markram (17) and Heinrich Klaasen (21) also fell after getting starts.

In the end, the Netherlands held the Proteas to 145/8 and deservedly claimed their second win in a row. Glover ended with superb figures of 3/9, while Fred Klaassen (2/20) and Bas de Leede picked up two scalps each.

Speaking after the historic win, Netherlands skipper Scott Edwards said, “I am lost for words. Went so fast. This is going to take a bit of time to take it all in. We are used to these conditions in Netherlands. We were confident around the 160 mark to defend this.

“Another great experience, another big upset from the Netherlands. Absolute goal for us after losing the first two games that we are still playing for a spot in the next World Cup. Two results go our way,” he concluded.