Mumbai’s run machine Ajinkya Rahane is finally set to make his Test Debut at Delhi this Friday as India’s new opener Shikhar Dhawan has been ruled out of action with a hand injury.

Mumbai’s run machine Ajinkya Rahane is finally set to make his Test Debut at Delhi this Friday as India’s new opener Shikhar Dhawan has been ruled out of action with a hand injury. Dhawan trying to put in a sliding stop on Day 3 of the Mohali Test had jarred his left hand which resulted in a fracture that would put him out of cricket for six weeks. 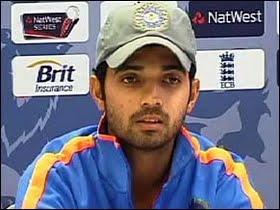 The Selectors had named Gautam Gambhir as Dhawan’s replacement but withdrew his name after it was revealed that the former was diagnosed with jaundice. The eventual replacement for Shikhar Dhawan was named as Suresh Raina. Realistically speaking, Suresh Raina being a middle order bat will not be in a position to take the vacant opening slot left by Dhawan in the XI. So the sure bet will is Ajinkya Rahane opening the batting with Murali Vijay.

Rahane who has been waiting long to make his Test Debut will be hoping that the team management doesn’t go with Cheteshwar Pujara as the opener to accommodate Raina in the middle order. Suresh Raina who did score a century on Test debut has shown poor temperament in this format of the game. The southpaw struggled to score anything big in the four-day Ranji Trophy matches as well. He certainly is very lucky to be named in the Indian test squad despite all his failures in the longer format of the game.