South Africa eased to a 10-wicket win with 44 balls to spare to eliminate Zimbabwe from the ICC World T20 2012. It was no contest at Hambantota once South Africa restricted Zimbabwe to just 93 runs in 20 overs.

South Africa eased to a 10-wicket win with 44 balls to spare to eliminate Zimbabwe from the ICC World T20 2012. It was no contest at Hambantota once South Africa restricted Zimbabwe to just 93 runs in 20 overs.

Openers Richard Levi and Hashim Amla showed no hurry at all to come up with some useful batting practice. Richard Levi helped himself to 50* from 43 balls with 6 fours while Hashim Amla collected 32* from 33 balls with 3 fours. Jacques Kallis got the Man of the Match for his bowling efforts. 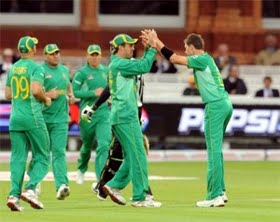 Zimbabwe Innings: Zimbabwe are on the brink of elimination in the ICC World T20 2012 after posting a poor total of 93 for 8 against a fiery South African bowling attack. The Zimbabwean batsmen barring Craig Ervine batted like absolute novices against the fast and furious South African bowlers including all-rounder Jacques Kallis who claimed figures of 4-1-15-4.

This match had turned out to be a one-sided contest once the Zimbabweans were rocked by three early wickets with the duo of Dale Steyn and Morne Morkel giving away nothing in their opening burst. From 16 for 3 in the 5th over, the innings went nowhere and it was just batting out the overs for the minnows. Only left handed Craig Ervine looked solid at the crease scoring 37 (from 40 balls with 4 fours).

The rest of the Zimbabwean batsmen just surrendered to the pace battery of South Africa and wickets kept on falling at regular intervals. Dale Steyn took 1 for 9 in his 4 overs, Morne Morkel took 2 for 16 in his 4 and Albie Morkel and Jacques Kallis backed them up to ensure that there was no recovery at all from the Zims.

Toss and Teams: South Africa have won the toss and elected to field first in the Group C Match of the ICC World Twenty20 2012 against Zimbabwe at Hambantota. This is the first game for the Proteas while Zimbabwe are in a must-win situation to stay alive in the tournament. The reality is that they are on the brink of elimination after a massive defeat in the opening game against hosts Sri Lanka at this same venue.

Zimbabwe have made one change with the experienced left-arm spinner Ray Price replacing Chris Mpofu. South Africa have given an opportunity for rookie Farhaan Behardien.