Mumbai batsmen did well to cross 200 on a batting friendly pitch in Sharjah and Pattinson, Boult bowled economically while also picking up wickets as Sunrisers Hyderabad lost the match by 34 runs.

Mumbai skipper won the toss and understandably chose to bat first given the number of times 200 being scored here and also the inability of sides to chase that score down. He came to open the innings alongside de Kock and would have hoped to pile on runs on a belter of a pitch. However, that could not happen with SRH being sharp in the field, as they took a review for a caught behind appeal against him off Sandeep Sharma and got it in their favour. Suryakumar Yadav came in at number three and smashed Siddharth Kaul for three consecutive fours as MI got off to a good start despite losing Rohit in the very first over. Kaul however, came back to dismiss the MI number three as he flicked one straight to Natarajan at short fine. 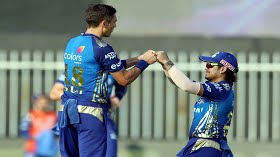 With two left handers at the crease now, as Kishan joined QDK, Warner refrained himself from using the left arm spin of Abhishek Sharma and tried to attack with the leg spinners Rashid Khan and Abdul Samad. With the pitch not offering anything to the spinners, QDK took this as a chance to get back into form, as he hit two sixes off Samad. Warner also slipped in two overs from Williamson, although he was expensive as well. Rashid, who wasn’t having the best of days considering the high standards he sets for himself, came back to scalp de Kock, not before the MI keeper had made a crucial contribution of 67 runs. Kishan was looking good but lost his wicket against the run of play as Pandey took a blinder at long on.

Pollard joined Hardik Pandya and both started from where they had left against KXIP in the previous match. Natarajan blew hot and cold as he missed his yorkers on more than one occasion but finished with respectable figures of 4-0-29-0. Kaul, playing his first match of this season, bowled Hardik with a bang on yorker but was in for some severe punishment as the other Pandya came and destroyed Kaul’s figures with 20 off the 4 balls he faced, as Kaul gave away 64 in his four overs. MI crossed 200 as they finished at 208-5.

Chasing a mammoth total, SRH would have fancied themselves given the strong top 4 they possess. Bairstow got them off to a flier as 30 came off the first three overs with a struggling Warner trying to middle a few. Unlucky SRH however lost their firing batsman as Bairstow pulled one straight to Hardik. Pandey came in and continued the good work done by Bairstow as SRH never looked out of the match. Both Pandey and Warner smashed sixes off their first ball against Chahar as 16 came off the leggie’s first and only over in the match. Pandey perished while trying to loft Pattinson as he offered a dolly to Pollard at long off.

Williamson joined the skipper with their side at 94-2 after 10, and SRH still looked with a very good chance. Warner only added to those chances as he smoked Krunal Pandya for a four and a six. Williamson got out cheaply to his Kiwi mate Boult as SRH were now looking in trouble. MI bowlers seemed to have found the strategy to keep Warner quiet : bowl slow outside off. Last match hero Priyam Garg couldn’t do much as he was caught brilliantly by Chahar in the deep.

Whatever slim hopes were left were resting on Warner’s shoulders only, but he couldn't deliver as he was caught at short third man off Pattinson, for solid 60 off 44 balls. With the match effectively over, 18 year old Abdul Samad gave a glimmer of hope by scoring 10 off 2 against Bumrah in the 17th, but it simply was never going to be enough as they lost the match by 34 runs, with Pattinson, Bumrah and Boult picking two wickets apiece.