When Australia resumed day three of the Chester-le-Street Test, they went in with hopes of building a decent first-innings lead over the Englishmen. However, at the end of the day’s play, it was the England camp that was smiling.

When Australia resumed day three of the Chester-le-Street Test, they went in with hopes of building a decent first-innings lead over the Englishmen. However, at the end of the day’s play, it was the England camp that was smiling. Their bowlers first dismissed the last five Aussie batsmen for the addition of only 46 runs. Ian Bell then came up with his third century of the Ashes, extending the form of the his life, as England recovered from yet another top order batting collapse to end the day well-placed on 234 for 5, an imposing lead of 202 considering they still have five wickets in the back.

Just like day two belonged to Australian centurion Chris Rogers, day three was all about the sublime ton by Bell. With England having been reduced to 49 for 3 courtesy yet another incisive spell by Ryan Harris at the start, the hosts were in real trouble of undoing the good work done by their bowlers earlier in the day. But, Bell made sure that England seized back the initiate with a flawless display, which killed Australia’s challenge, and put England on top for the first time after three days.

Bell built his around innings his favourite release stroke, the dab to third-man, as a result of which he never got bogged down. Michael Clarke also missed a trick by not covering the gap, and by the time he did, Bell was well into his stride. While Bell was undoubtedly the hero of the day, the two partnerships he strung with Kevin Pietersen and Jonny Bairstow saw to it that England’s bad start was pretty much overcome by the end of the day. Though both Pietersen and Bairstow fell after getting starts, they played their part in putting Australia on the back foot. 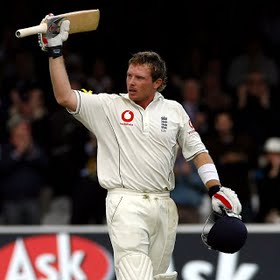 Bell and Pietersen’s 106-run stand was the defining partnership of the day. They counter-attacked with élan, and although Pietersen had trouble with the short ball early on, a couple of boundaries off Peter Siddle set him on his way. The runs came rather easily for both as the pressure eased, and there was little support for Ryan Harris as the England duo went from strength to strength. There was a ray for hope for the Aussies when Nathan Lyon yet again dismissed Pietersen, having him caught at cover. However, Bairstow joined Bell and continued England’s recovery. Though Lyon got Bairstow as well, having him caught behind for 28, England were on top by then.

Earlier in the day, Australia lost their advantage with the immediate loss of their overnight batsmen. Haddin was trapped by front by Graeme Swann, going back to a sharp delivery. The big setback was yet to come. Centurion Chris Rogers could not find his rhythm on a new day, and a bouncing delivery from Swann found his glove, and the ball was smartly pouched by Matt Prior. Among the tail, only Harris showed resistance with his 28, but Broad had him lbw to finish with a much-deserved five-for. England had sneaked back into the game, and Bell did the rest.