Kolkata Knight Riders clinched their maiden IPL Title after defeating defending champions Chennai Super Kings by 5 wickets with two balls to spare in a nerve-wracking thriller at Chepauk! There was an unlikely hero for KKR in the form of Manvinder Bisla, who played a match-winning knock of 89 from just 48 balls with 8 fours and 5 sixes. Bisla found the perfect fiddle in South African great Jacques Kallis, who got 69 from 49 balls with 7 fours and a six.

Bisla and Kallis put up a massive 136-run stand for the second wicket after Skipper Gautam Gambhir was clean bowled by a slower one by Ben Hilfenhaus in the first over. The second wicket stand made short work of the otherwise huge target of 191. The pitch at Chepauk remained true as both Bisla and Kallis played their shots freely on the up even against the spinners. 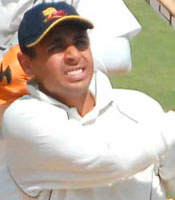 The Bisla-Kallis stand almost sealed the run chase for KKR but towards the end, CSK managed to get back into the game. The pressure got right back on KKR after Bisla and then the big hitting Yusuf Pathan got out. Kallis couldn’t finish the game too but KKR got through in the final over thanks to the crucial cameos from Shakib Al Hasan (11* from 7 balls with a four) and Manoj Tiwary (9* from 3 balls with 2 fours). KKR in the end needed 9 runs to win from the final over bowled by Dwayne Bravo which was easily got by Manoj Tiwary.

Chennai Super Kings are favourites to clinch a hat-trick of IPL Titles after running away with a massive total of 190/3 against their Challengers – Kolkata Knight Riders! CSK made the most after winning the crucial toss and batting first. It has now left the KKR to chase a huge target under pressure! KKR has so far been a team that has won most of its matches because of its wonderful bowling unit but tonight it was taken to the cleaners by Suresh Raina, who blazed away with 73 from just 38 balls with 3 fours and 5 sixes.

Raina went onto smash Sunil Narine for a massive 105-meter six as well in the course of his innings. Narine, who has been the success story of KKR in the IPL 5 was taken for 37 runs in 4 wicketless overs. Chennai would thank its openers for giving it a sound platform once again. Murali Vijay scored a fluent 42 from 34 balls with 4 fours and a six while Michael Hussey lasted longer than him to score 54 (from 43 balls with 4 fours and 2 sixes).

Apart from Sunil Narine, another international star Brett Lee was costly too as he went for 42 runs in 4 overs. As far as the awards were concerned, Manvinder Bisla deservingly got the Man of the Match while Sunil Narine, who only failed in this big game was named as the Player of the Tournament.

KKR have made two changes with Brett Lee and Wicket Keeper batsman Manvinder Bisla coming in for Brendon McCullum and L Balaji, who is out with a hamstring injury. Chennai Super Kings have retained their winning combination.

The pitch for this big final has a bit more grass than before and it may not turn that much like in the previous games at this venue.