India U-19 coach Rahul Dravid believes that there is much more in store for the talented youngsters who won the U-19 World Cup on Saturday, defeating Australia.

India U-19 coach Rahul Dravid believes that there is much more in store for the talented youngsters who won the U-19 World Cup on Saturday, defeating Australia.

"It's a memory they'll cherish for a long time and hopefully it's not a memory that defines them and they will have a lot more bigger and better memories as they go on ahead in their careers," coach Dravid was quoted as saying in a PTI report. 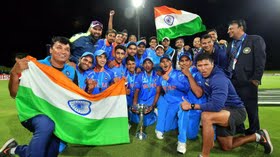 Dravid was also effusive in his praise of the coaching staff. "Coaching this team, I tend to get a lot of attention, but it is really about the quality of support staff that we have had, there have been seven or eight of us, who have been together for the last 14 months. The effort they put in was incredible," he said.